A Gimp Year in Review

A lot of really good things happened in 2012--Meryl won her third Oscar, I got to see Kelly twice in concert, Barack won the re-election, Kevin visited San Francisco for the first time since I moved here, my novel-in-progress has been consistently moving forward, I made new friends, I got to reunite with Serban and meet his lovely girlfriend, Manuela...

But, to no surprise, 2012 will always be the Year of the Achilles (unless the Mayans steal my thunder and the world really does end in 13 days). Exactly a year ago today, I performed a tumbling pass I shouldn't have, and when I came down on the "trampoline," I heard a pop that led me to believe I broke the trampoline itself.

It's only a matter of time before my memory of all the events that followed dull into a general "it took a long fucking time" mentality, and since I have an obsessive personality, this is a timeline I want recorded. It was first suggested I do so to map my progress, but I found myself recording things that weren't directly related to the recovery but still affected by it, like the graduation ceremony from my graduate program on December 16, 2011, that I couldn't attend, the way skin fell off my foot even a week after my cast was removed. But even my long-winded posts can't support such a detailed picture of what this year has been like, so I'll stick with the basics.

In order to preserve this year in all its gimpy glory, I've come up with a photo timeline. In a year where progress has felt so incredibly slow, it provides some kind of comfort to see that I've actually come pretty far. 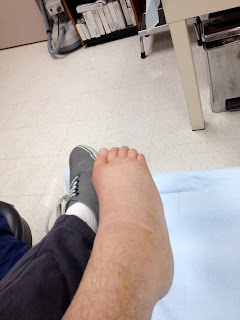 4/12/12: Physical therapist hypothesizes that I fractured my ankle at the time of injury, given persistent problems with my distal tibia joint. Also: I take my first shower without a shower chair or cast in four months and 12 days.

When I decided to go through with the surgery, I was told it would be a year before I was back to 100%. Unforeseen ankle problems and real life has prolonged things, but for the most part my daily life is back to normal--minus the eight exercises I have to do daily or every other day.

There have been a lot of lessons learned about this--some of which I touch on in an article I just wrote for Snap magazine, a beautiful photography magazine, and it's an article I'm really proud of--but the clearest one has been the depth and patience and encouragement of my personal support system. The doctors and physical therapists have been, mercifully, great, but my family, friends, and boyfriend were oh-so wonderful throughout this entire process, helping with my physical and mental recovery from this rather unexpected event.

But now I'm getting better, and I suppose it's time to stop being so self-indulgent and reflective.

Danny
I'm a creature of comfort, habit, and distraction. My distractions and obsessions are organized into my daily routine so that they, too, become comfortable. Currently at USF to become a published, respected writer, and whether or not that works out, I'm loving the process. For future reference, my definition of "mod" has been and always will be anything great, fashionable, wonderful, clever, awesome, etc. I say it all the time...learn it. Oh, and I've met Meryl Streep. Totally content with life.